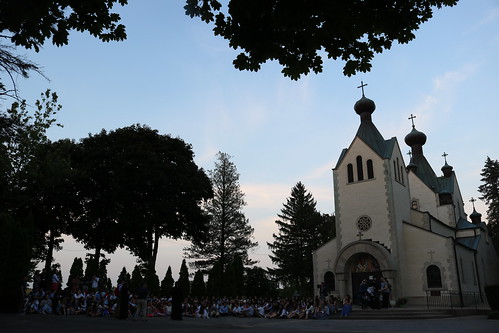 Day three offered Fanari Camp many blessings and surprises alike, from a night with a Saint, to an unexpected detour…

The day began with Orthros served by Fr. Panagiotis, who enlightened the camp with his sermon on staying true to God’s calling, regardless of others’ criticism.

After daily activities, including a discussion on the true meaning of “Agape” (or Ah-gah-peh, as some scholars call it) in Bible Study , a zombie-themed lesson on self-love with Fr. Panagiotis in OL, a “sticky situation” for team building in Omada, and Byzantine chanting in Flex, it was finally time to travel as a camp to Saint Sava monastery in Libertyville, IL.  The camp quickly boarded buses to visit the incorrupt body of Saint Mardarije.

After the buses safely arrived, campers filed into a beautiful chapel, filled floor to ceiling with illustrious icons.  As soon as one entered the building, they could hear the quiet gasps of all as they took in the holiness there.  A brief history of Saint Mardarije given joyfully by one of the Serbian priest who was actually at St. Sava when everything happened, and campers were then given the honor of venerating the Saint’s incorrupt relics.  The Chapel was *almost* silent during this deep spiritual experience, a rarity at Fanari camp.

The remains of the day were spent at St. Sava, watching the sun go down , spending alone time with God while preparing for Wednesday’s Holy Confession, and listening intently to Fr. Kosmas’ “spiritual vitamin” (which left campers both inspired and ruminating on NHL draft picks for this season).

While returning home, some campers hit a (literal) road block.  The Delphian bus had a maintenance issue that required stopping, and the cabin fell behind.  Awaiting to be picked up the campers made their way toward the glowing lights of a nearby rest stop, and to safety and more importantly, bathrooms.  All were returned safely back to camp, just in time for devotionals with the guidance of our spiritual fathers, and (eventually) bed. It was an absolute blessing and I am looking forward to the rest of the week to come.